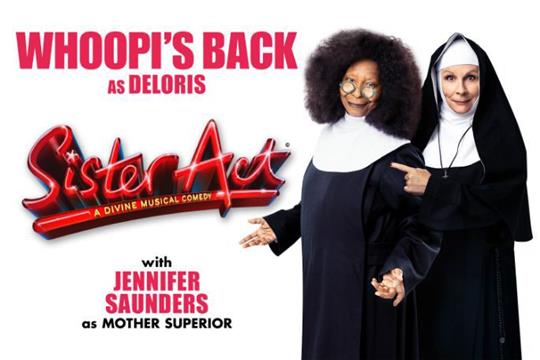 The show will be delighting the Spectators at the Eventim Apollo from 29 July to 30 August with just 39 performances.

What can be more entertaining than seeing Sister Act in summer 2020 at West End? To add up the spice of amusement in the musical, Whoppi Goldberg and Jennifer Saunders will perform again in the show. Sister Act is an outstanding show based on the 1992 blockbuster of the same name. Oscar Award winner Alan Menken’s music and Glenn Slater’s lyrics makes the show absolutely incredible. Book by Bill Steinkellner and Cheri Steinkellner and additional book material by Douglas Carter Beane, the musical had a regional premier in 2006 in Pasadeena, California. The original West End production was premiered on 2 June 2006 at the London Palladium, starring Patina Miller and produced by Whoppi Goldberg and Stage Entertainment.

The story of this hilarious show is about a disco diva Deloris Van Carter who happens to be the witness of a murder and hides in a convent, disguised as a nun for protection. During her time at the convent she develops a unique bond with her fellow sisters there and helps them find their voices. In her efforts of doing so, Deloris embarks on a journey of rediscovering her true self. The musical has everything which a remarkable show can have, good music, brilliant performance, breath-taking dances and a captivating plot. In short, it’s homage to friendship, music and sisterhood in an uproarious manner.

The UK tour of the Sister Act with Edwards performing in the lead role is all set to run from 21 April in Leeds, Manchester, Newcastle, Leicester, Birmingham and Sheffield. More tour dates of the fabulous musical will be announced soon.

The lead role of Deloris will be reprised by the legendary Academy Award winner Whoppi Goldberg. The role of Mother Superior is being played by BAFTA Award winner Jennifer Saunders who played the same role back in 2010 at London Palladium.