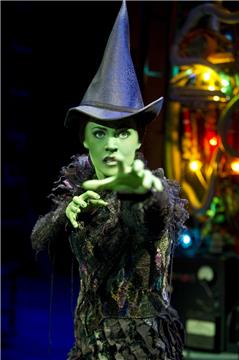 WICKED, the West End musical phenomenon that tells the incredible untold story of the Witches of Oz, is proud to announce that, from Monday 5 September 2016, the new cast that will lead the award-Â­âwinning show through its 10th birthday celebrations at the Apollo Victoria Theatre will include: Rachel Tucker, who will return to the London production direct from a triumphant run on Broadway to play Elphaba; Suzie Mathers, who joins from the Australian production to star as Glinda; Oliver Savile, who continues as Fiyero; Anita Dobson, who joins to play Madame Morrible; Mark Curry, who continues as The Wizard; original cast member Martin Ball, who returns to play Doctor Dillamond; original cast member Katie Rowley Jones, who continues as Nessarose and Idriss Kargbo, who joins to play Boq. Alice Fearn will be Standby for Elphaba and Carina Gillespie continues as Standby for Glinda.

Executive Producer Michael McCabe said: âWe are delighted to announce the fantastic company that will lead us through the 10th birthday celebrations at the Apollo Victoria Theatre later this year. It is a great pleasure to welcome back from Broadway the incredible Rachel Tucker who will star alongside Suzie Mathers, who appeared in the Australian production, as âElphabaâ and âGlindaâ. Surrounding them will be many exciting new faces, including the incomparable Anita Dobson as Madame Morrible, and celebrated alumni, including the return of original cast member Martin Ball as Doctor Dillamond.â

On Tuesday 27 September 2016, Wicked will celebrate an extraordinary 10 years in London. Now the 8th longest-Â­ârunning show in the West End* and already the 19th longest-Â­ârunning show in West End theatre history*, the âhugely popular showâ (The Times) has played over 4000 performances and been seen by over 7 million people in London alone.