Life of Pi Tickets With Dinner

More about Life of Pi

After a cargo ship sinks in the middle of the vast Pacific Ocean, there are five survivors stranded on a lifeboat - a hyena, a zebra, an orangutan, a Royal Bengal tiger, and a sixteen year-old boy named Pi. Time is against them, nature is harsh, who will survive?

Based on one of the most extraordinary and best-loved works of fiction - winner of the Man Booker Prize, selling over fifteen million copies worldwide - and featuring breath-taking puppetry and state-of-the-art visuals, LIFE OF PI is a universally acclaimed, smash hit adaptation of an epic journey of endurance and hope.

Long after the curtain falls, "Life of Pi will make you believe in the power of theatre" (The Times).


'A extraordinary journey. Unmissable' - The Guardian


'It will make you believe in theatre. A triumph' - Sunday Times


'Everything about this production is amazing' - The Observer


'The puppetry is out of this world.' - Mail on Sunday


'Breath-taking. It will make you believe in the power of theatre. Roar it out: this is a hit.' - The Times

Access description: One 20cm step up to foyer through heavy double doors opening inwards. Box Office counter on the right. 18 steps down to Stalls. Staircases have handrails on both sides and some steps are highlighted. 12 steps up to the Royal Circle, 21 to the Upper Circle and approx. 43 to the Balcony with 2 steps between rows. Auditorium is carpeted – all other areas are tiled.

Sound Amplification: Infra-red system with 20 headsets. ID required. Collect headsets from the Cunard Bar which is a kiosk located at the bottom of the stairs from the foyer to the stalls. Induction loop at Box Office.

Guide Dogs: Guide dogs are allowed into the auditorium and staff are available to dog-sit in the foyer.

Disabled Access: 2 spaces in Box A but no access for electric wheelchairs or scooters. Maximm 2 wheelchair user patrons per performance.

Toilets: One toilet in the box although it would not be possible to access this in a wheelchair. The women’s off the Stalls has been slightly adapted. From the foyer bar, the men’s and women’s are up 8 steps with a further 2 steps down inside the entrance to each. 1 step down to non-adapted toilet accessed via St Martin’s Court (level access) – please ask staff to assist.

Disabled Toilets: None at present. Patrons can use adapted toilets at the Noel Coward theate behind the Wyndham's. 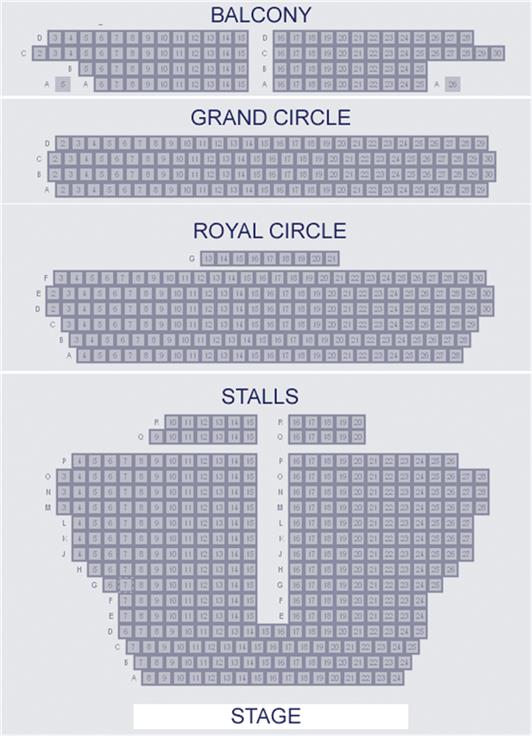